Reading time 2 minutes
Carnival in Garda Trentino is permeated with the flavours of old traditions that live still nowadays, stronger than ever before.

Polenta e Mortadella is probably the most ancient local festival in Garda Trentino. In Varone, a small community near Riva del Garda, folklore and traditions have been kept alive year after year for the last fifteen years, thanks to two dishes, polenta and mortadella. They are part of our collective memory and represent a real food must still nowadays.

It’s not only about good food

This year the festival will be held on March, the 1st from 13:35 to 5 pm, and will be anticipated by a non-culinary event: a fun run called “Quattro passi in attesa di polenta e mortadella“. Different itineraries whose money raised will be given to one of the Gruppo Missionario Alto Garda’s charity projects.

Polenta is an integral part of the Trentino culture, everybody knows it. Its history is lost in the darkness of time and still nowadays, when good food is mentioned, it’s impossible not to glance over polenta, sided by meat dishes (cunél, rabbit, mainly), but also mortadella, as during this local festival!

Polenta e Mortadella is probably the most ancient festival here around. Its history? Far faraway, it seems to date back in 1463. The tradition has been kept up until present times, adding the tasty mortadella to the polenta. It’s something like a “Carnival farewell party” where polenta and mortadella are the absolute protagonists among shindig, music, entertainment and folkloristic shows, served steaming and tasty to every lover!

On the first Lent Sunday, an age-old local festival takes place in Varignano, once part of the Romarzollo municipality together with Vigne, Chiarano, Padaro and Ceole. Its name is L’Alloro e il Bambù, and it is rooted in the pagan culture.

Once considered an auspicious and propitiatory rural celebration, it was later turned into a religious one with the advent of Christianity, underlining the purifying value of fire. 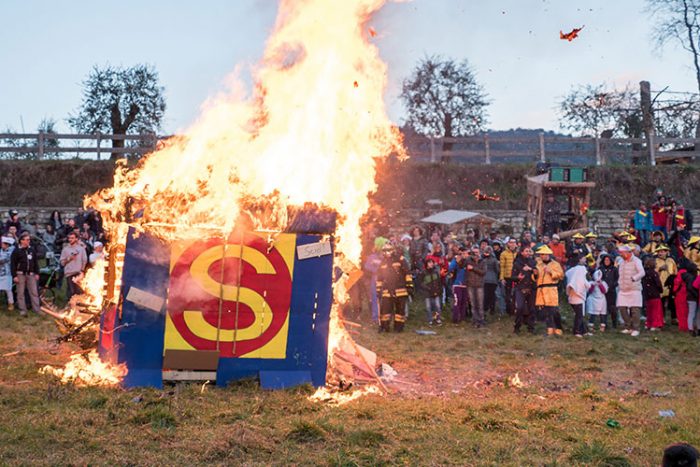 The main aim was obviously to bring the harvest to be fruitful, and still nowadays it seems to energise positively all the participants thanks to the rich parade, the cheerful food (grostoi, mulled wine and other sweets), music and shows! But why Alloro e Bambù (bay leaf and bamboo canes)? Because the Carnival parade, made up of pyramidal bamboo canopies packed with decorations, runs through the village alleys, preceded by boys bearing the solàgni, bay leaf twigs surrounded by streamers and colorful eggshells representing the fertility.

The parade gets ultimately to the dosso della Tiera, a hill where the canopies are burnt down in an impressive blaze. A whole day dedicated to genuine happiness. Because if it’s true that happiness is in small things, it is also true that you get them better with a full stomach! Some hot steaming polenta with mortadella is waiting for you in Riva del Garda. And if this isn’t exactly you favourite dish, you could just come and enjoy the stunning landscape of Garda Trentino!

For a match made in heaven: Valentine’s Day in Garda Trentino

Lots of original ideas for Christmas gifts made...

Shopping on Lake Garda in Trentino: enjoy a...

Sup. All seasons are the right ones for...

Climbing at Garda Trentino in winter

For a match made in heaven: Valentine’s Day...